I'm Jealous Of A Trans Woman

Saw a transgendered woman today and had 2 thoughts:

1. How TF is she so damned pretty? Like, she was born with a dick and STILL somehow managed to be prettier than me. Ugh. I am jealous, petty, and a bad person.

2. (More profoundly and, hopefully, redeemably) There are entire chapters - books even - of the human experience that I will never know or understand firsthand.

I've been straight and Christian, and I've been bi-sexual and Jewish, and I can tell you definitively that the entire world - how I experienced it and how it reacted to me - varied wildly depending on which of these identities fit me at the time.

To be clear, each designation actually WAS who I was at the time, so each felt genuine TO ME, but how the world reacted to and processed me was shockingly different. And the world's reaction to each designation then affected how I felt about the designation - and about myself.

Examples: I remember once in undergrad my girlfriend and I went out to eat with her dance team after her recital. Everyone was very nice. No rude "dyke" comments or anything like that. We weren't treated poorly. (Good job UGA circa 2001 BTW)

But we were treated as objects of interest. As we ate, the dancers stole glances our way. Not malicious glances, just "look at that exhibit in the zoo, isn't it strange/interesting?" glances.

When the check came, all eyes at the table dropped any pretense and just stared, waiting to see who - in a romantic relationship between two women - was expected to pay the bill.

Had I (or she) been a man, we would have been blissfully ignored.

As it was though, I was super uncomfortable.

And that's one lesson I learned about being a sexual minority - even if you are not met with hostility, you will be met with an uncomfortable amount of interest. For some, this is fine. Maybe those folks desire the opportunity to educate. But I don't. I just wanted to eat my damned pasta in peace.

Anonymity is a luxury afforded to all of those who fall within the categories of "normal" or "majority."

Contrary to the ludicrous belief that there's a War on Christmas, Christians in this country ARE NOT persecuted. Neither are heterosexuals. But when I stepped outside of those two norms, the reactions I received were so astonishingly different that they forever changed my (previously much more limited) worldview.

It also affected how I felt about my own place on this planet.

I've been a performer all my life, so being in the spotlight wasn't a new feeling - but in my Christian hetero life, I basked when I chose and enjoyed anonymity the rest of the time.

Minorities, I found, don't have that option.

When Christina and I were together, the spotlight shone 24/7 whether I wanted it to or not...and suddenly everything I did wasn't just something Erin did. It was something BISEXUAL Erin did. Or maybe all bisexuals did. Like I was suddenly an example of/ambassador for/god-help-me-not-an-embarrassment-to-bisexuals-of-all-stripes-everywhere.

It was an enormous burden, and I was honestly relieved when Christina and I ended things and I started dating men again...

By this time I was already questioning my Christianity (had been since adolescence) and my political affiliation (raised Republican Conservative). Neither felt like a fit - and the "squeeze" of those identities would grow to choke me over the next few years.

So I pried them off, and sought something that fit me better.

In 2011, I finally got a gulp of air. Judaism provided the oxygen that Christianity had siphoned from the room.

My conversion journey is the subject for a book, surely, but for these purposes I will tell you that the more I pursued it - the more I changed and the more I allowed it to change me - the world once again reshaped itself, in some cases closer aligning with and in others, utterly shunning me.

My experiences as part of a marginalized people opened my eyes to the systemic barriers still rigidly in place, the struggles that come with "difference," the ludicrous notions of "wars" on majority groups and the fucking nonsense that is "All Lives Matter."

I finally saw what people meant when they said they were being denied a place at the table.

As a minority, I have been held accountable for every decision made (or not made) by Jews worldwide with whom I have no other affiliation.

I have been hated for that affiliation.

And defended for it.

I can only assume this experience in many ways echoes the experiences of other religious, racial, and cultural minorities.

I imagine it's true for the stunningly beautiful trans woman I saw and so envied.

I am grappling with that envy.

Because now I recognize that envy for what it is and from whence it came:

2. My own feelings of entitlement.

As a woman born with female genitalia, I somehow feel entitled to be more aesthetically pleasing than someone born with male genitalia. AND HOW FUCKED UP IS THAT?

To my credit, I can now say I recognize the shortcomings of my initial, gut reaction.

I can look at myself critically and ask, "Why do you feel this way? Is it good/appropriate to feel this way? And if not, how do I change the way I feel?"

And I am very proud of myself for having at least that level of self reflection. Some folks I know never even get that far...

And that's something that my own life journey and experiences as a person of minority status have taught me - how to have empathy for other people. How to check my own privilege and meet people at their level. How compassion is a more desirable character trait than judgement (which is saying something, as, when I was at UGA and dating Christina, I was an ENFJ).

I should wrap this up. It's late and these Raisinettes aren't gonna eat themselves...but I just wanted to put it out there that there are entire worlds that you and I will never - even with the best of intentions - know.

I do wish I could though.

Reincarnation - can't say I believe in it - but having everyone complete a few cycles sounds like an excellent idea: a karmic way of ensuring we all walk a mile in another's shoes.

I think it'd do us all some good.

An oft-overlooked benefit of health is the opportunities for growth it provides.

Because I'm sick AF, folks now treat me as some sort of sage. Like every day with me is "Tuesdays with Morrie" or some shit, and they can better cope with their own mortality (and its relative distance to my horizon) by simply being in my presence.

Y'all - I'm still the same fucking idiot I ever was.

And I'm scared to death.

So let's stop with the hushed tones and reverence plz.

While I am supposed to be growing in areas like gratitude and acceptance (that's what chronic, scary illness teaches you right? How to be a warrior poet?)... I'm a petulant child who makes her situation worse by going back and reading what she wrote years ago when she was healthy - accounts of the day's adventures. The lovely little gifts life hurls in your path when you're well enough to walk one.

I was a good writer once.

And a risk taker - so life threw me many a gem before fucking/floxxing me in 2015.

Just before becoming sick I went on a trip to Bermuda to cover the renovation of a historic hotel and the opening of a restaurant by some celeb chef. I spent a 3-day weekend in an all-expenses paid paradise avoiding the social media influencers who were whoring themselves out to the celebs, in favor of courting the cute hotel staff, getting invited to locals parties, and seeing the REAL, locals' Bermuda.

When Jordan wasn't tooling me around town, showing me where he played rugby, showing me the boats and talking about fish in a way that miraculously didn't bore me, grabbing my hand and dragging me to and through the nightlife...I spent quiet time around the hotel marveling at the artwork by Andy Warhol and Nelson Mandella. Quiet, reflective, moved by the masterpieces I could literally touch with my hands. While the influencers walked right by. They were off to fawn over the celebrity chef. You know I don't even remember that guy's fucking name now?

I then came home and penned a piece about the art - not AT ALL my assignment - but my editor loved it and printed it anyway...

Did I mention I almost got arrested for trespassing?

Yeah, I don't trespass much now. I often don't get out of my pajama pants.

Does that sound inspiring to you?

Because it sucks for me.

Before getting sick I was always getting almost arrested for trespassing (almost bc the cops always let me go. I know. White, female privilege.)

I guess what I am saying is, I miss almost getting arrested.

I miss going places other people can't, shouldn't, or wouldn't.

I miss that girl who walks away from the party to view the art.

I miss having a body that allowed me to do those things.

A body that allowed me to do even the most run-of-the-mill things.

I go to write now, and my mind is sluggish and slow. My neuropathy is pervasive and steals my words because the fear steals my thoughts.

I can focus on my prose when I can't feel my toes?

This illness has robbed me of so fucking much.

So much of my autonomy - and therefore my personality - is on the table.

I don't know what else it's gonna take from me (or when).

The fear is palpable. It's my only constant companion. And I wish I could shake it.

Maybe then I could string two sentences together again. 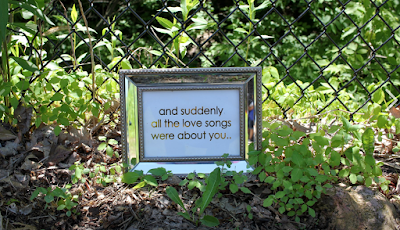 I don't wanna do this.

I DO NOT wanna do this.

But you got me thinkin' 'bout doin' this.

Y'all don't know me.

And you can't hurt me.

so even if you desert me

I can say it don't mean shit to me

say it don't hurt when you hit me

when you don't give enough of a damn to give your 2 cents to me.

but my armor's on

so you can't see

thinkin' 'bout takin' my armor off.

What would happen if I...

took my armor off?

Want to trap, eat, feast on all of ya

Can't have what I want

so I'ma bury ya

maybe I envy ya.

How you lose yourself

in X, booze and designer shoes

I can't escape myself

Got my armor on.

so y'all can't hurt me

can't hit or quit me

But you - baby you got me thinkin'

thinkin' 'bout takin' my armor off.

What would happen if I...

took my armor off?

Would you, could you

Put no one above me?

or do I just want you to be?

Your mind and mouth

Forget your 2 cents - I don't even register.

So I'll be leavin' my armor on.

Leavin' my armor on.

And it's so heavy, baby.

Leavin' my armor on.

But it doesn't stop us from gravitating to the prettiest face in the room...

Which hurts those of us whose heart, soul, and mind are the pretty parts.

So many days I'd trade this brilliant mind for a pretty face...

That said, I'm a Pisces.

All of my best friends are Geminis.

And every man who ever ripped my heart out of my chest was a Libra.

Like it was written in the stars or some shit.