My Life In One Sentence 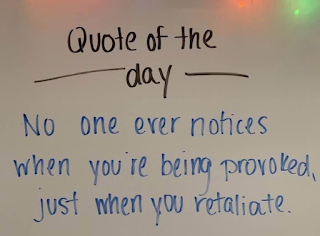 There's only one Mother's Day that actually stands out in my mind.

And that's the one where my Aunt Clara had a stroke.

We customarily honored our grandma (Clara's sister) every Mother's Day, but each year we also honored Clara, who watched me and my brothers while my parents were at work.

The parents and us kiddos brought flowers over that year.

We knew something was wrong because Clara kept repeating, "Who are those flowers for?"

This same exchanged happened - I dunno - maybe half a dozen times?

Clara never had kids of her own. Which was actually kinda common among her siblings. Clara was one of 10 kids, Of those, only 2 of the girls had biological children.

There's a lot to unpack here - about what constitutes a "mother" - about who we honor - about how that makes women who never had children feel - about how it makes kids who had shitty mothers or no mothers at all feel - about the grief those who lost their mother feel.

About why the one Mother's Day I really remember is this one...

Bad stuff stands out more to me than good stuff.

I guess I am a glass-half-empty kinda gal.

So the negativity of a stroke, of a woman who shaped me suffering, of having no idea what was going on or how to help it - I guess all that shit stuck with me more than the customary annual brunches, flowers, and cards.

Like Valentine's Day, I've always kinda felt Mother's Day (And Father's Day) were Hallmark Holidays, designed to sell cards and candy and other things to give the economy a boost in the downtime after Christmas.

So, while I love my parents (and surrogate parents), I always kinda crinkled my nose at the dedication of a day.

I'm much the same way with other dedicated days - unless those days are religious. Religious days I still cling to for some sort of significance, but all the others - even anniversaries - kinda get a "meh" from me.

I'd blame chronic illness and that fact that I am always tired...but that's not really it (though it contributes).

I love my spouse. And my parents. And I appreciate that the USA allows me freedoms that many others in the world still don't have. I'm glad the Irish gave us a holiday in March, and my name and stuff. I'm not a robot.

I just don't GAF about most holidays in general, and Mother's and Father's Days specifically.

I like talking to my folks on a random Tuesday about shit going on in our lives. A dedicated day just seems to add extra stress.

And, as I've aged, I've realized how much pain such days bring for so many people. I mentioned 'em before, but I'll say it here again: those women who want to be mothers but can't. Those mothers who lost children. Those children (or adults) who lost their mother. Those people for whom "mother" was never anything but a source of pain.

And then, of course, there's the memory of Aunt Clara.

This Mother's Day - as with many others - I am thinking of Aunt Clara.

If there's a place after this one, I hope she's having a Happy Mother's Day.

And a Happy Mother's Day to each of you too...