17.5 months out from Cipro Poisoning

Everything with an * is a symptom of dysautonomia/POTS, which I developed from the use of Cipro.

I am terrified. I seem to match the progression on this chart - the blue line. The worst of the worst, according to "The Flox Report." 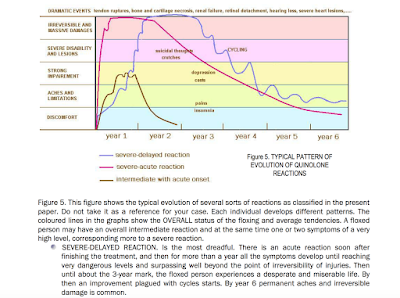 When I pray in my Temple, it's in a foreign tongue spoken fluently (almost exclusively) in The Middle East.

My holy day is not Sunday.

Many of the devout of my faith wear hair coverings.

If you trace it back far enough, all of my ancestors are immigrants.

But I could just as easily be a Muslim.

Given our present political climate, I think about this often.

As so many, including my rabbis, have pointed out - it was not so long ago that these anti-immigrant sentiments and fears were levied against the Jews - to catastrophic results. When we say "never again," we mean "never again TO ANYONE." Human beings have always feared - and persecuted - that which was different, that which the majority did not understand. And I see it happening today, even on my Facebook feed. Yes, to the Jews, but also to an alarming degree to Muslims. To this I say "never again."

I'm so tired. I am tired of trying to explain these things to people who refuse to see them. And I am also tired of trying to explain to persons of the majority what it is like - the little daily reminders - of what it means to live in any way outside of the majority. As I was not born Jewish, I believe I have a unique perspective on this. I lived as a member of the majority for 20-something years, and it's amazing how things begin to change the moment you decide to venture away from the majority path. It's an eye-opening revelation that cannot be fully appreciated unless it is experienced.

So I suppose, for the majority, the best way I can phrase this is as one, rather famous Jew said to the masses: "Love one another, as I have loved you." Majority folks (in the US, that means "Christians"), you profess a belief that a Jew - one chosen by God Himself - died to buy mercy for your immortal soul. To truly live his likeness - what does that call for in this situation? Jesus was willing to submit to very literal, physical torture, not for those who already believed and practiced as he did, but - more powerfully - for those who did not believe and practice as he did.

Sundays are the Sabbath for the majority.

So there's a Sunday thought for you.

the faults within our stars

Heaven, it elusive be

from Venus and from Mars.

before Began was lost

Faulty though our model, make

Our cognizance, our cost.

When and how and if I go, let it ne'er be said

That I went gentle into that good night

Silent in my bed.

Instead I rage the Heavens down

or call the Darkness up

The ripple that becomes the wave

I take THY bitter CUP

the faults within our stars

Fate these orbs to me bequeathed

the tortured soul of Mars

Furious I run into

The battle YOU have wrought

Like so many other of Your soldiers Time forgot.

And while I may not understand

the whys of Your great plan

the battle fraught with danger

is where I make my stand

And though I know I will not make

it to the Promised Land

I scream my screams, and reap my waves

As Samson, son of Dan.

Crushed beneath my arrogance

My dying breath it will be spent

Like so many other of your soldiers Time forgot.