He stays when I sink backward; He listens when I fret front

And he means what he says in the mean time

He has all of my time

Cross of the Albatross

Those "in the know" know my dumpster is the place of dreams...a malodorous den of magic where Life grants me her most magnificent miracles.

Today, I found someone in my den.

While climbing into the ol' Tracker, I noticed what I at first thought was a construction worker, sifting through the waste bin. Ass end up in dirty jeans, he didn't notice me or my pimpin' ride. He was entirely too busy scavenging for cans, which, once found, he would then place into one of two bags he had for the purpose.

I'm often slow on the uptake, but I realized then that this person was homeless, and likely collecting cans to trade for cash. He might even have been looking for something to eat.

I backed up to leave.

Here was a person, sifting my trash for remnants of things I'd deemed inconsequential enough to throw away. Here was I, on my way to a job that affords me food from a store.

My conscience wouldn't let me leave. My faith wouldn't forgive it. Neither would my heart.

"I don't want your money," came the reply. He said it with his hands in the air, as if caught. As if he were being arrested.

My heart pounded in my chest.

"I have money," he repeated it. "I have money." And he took from his filthy pocket a wadded green of some denomination. "I can just...I'll buy my own."

I didn't cry. I am now, but I didn't then. Crying wouldn't have afforded me what I desperately wanted in this moment.

I repeated my offer, this time with specifics. Fruit. Granola. Anything I had that would be easy for him to carry.

He approached the car; I did not back away. I thought about it, but I didn't.

He offered to give me his wadded bill - likely the only money he had - for a shower. "That's the hardest part about being homeless," he said. He offered to clean my bathroom for me.

He told me his name was Lawrence.

I lamented then, as I do now, that I could not - or did not - give Lawrence a shower. I feel guilt over it even as I type. Instead, I gave him the name and number of my landlord, a man I knew to be sympathetic to those in need. I told Lawrence my landlord had empty apartments; apartments where he could shower, unfettered.

I told Lawrence my landlord was always on-site in the morning. That he should be there soon.

I looked Lawrence in the face again, ashamed that I would open my wallet and my pantry, but not my home, and I started to leave. But Lawrence wouldn't let me go.

Instead, he reached around his neck and offered me one of his few earthly possessions - a beaded, wooden necklace with a carving of Africa.

I was near tears now.

My friends, I ask you - and I think about this often - who are we to overlook these people? To turn away because it is uncomfortable or to lock the doors from fear?

Is a Lawrence somehow less than?

His Rosary around my neck hangs heavy like a cross... 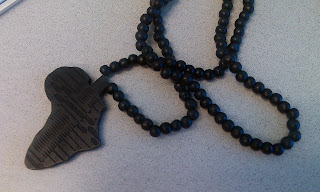 Matthew 25:34-36 Then the king will say to those at his right hand, "Come, you that are blessed by my Father, inherit the kingdom prepared for you from the foundation of the world; for I was hungry and you gave me food, I was thirsty and you gave me something to drink, I was a stranger and you welcomed me, I was naked and you gave me clothing, I was sick and you took care of me, I was in prison and you visited me."

All in our own little anthills

“Travel is fatal to prejudice, bigotry, and narrow-mindedness, and many of our people need it sorely on these accounts. Broad, wholesome, charitable views of men and things cannot be acquired by vegetating in one little corner of the earth all one's lifetime.” - Mark Twain

Ever irascible, Samuel Clemens often resulted to creating his own human beings, just so he could surround himself with folks he could tolerate.

Which may be why I believed one of my first callings - before I realized writing was a "calling" and not just a way of chronicling my misadventures for posterity - was to diplomacy.

My ideas on people are mixed, and tend to fall more along the love/loathe ends of the spectrum than anywhere resembling the middle, and, as diplomacy relies on little short of caring for other humans and making at least an attempt at a middle ground, I do seem to be a bit ill-suited for the post.

Be that as it may, I, like the hot-tempered, mustachioed man I so admire, somehow fancy myself a vessel for shared human experience and common ground.

As far back as I can remember, I was crafting scenarios in my head where I could come to the aid of warring factions, gain their respective confidences and somehow - always through a stroke of my own brilliance - bring each side to see the merits of the other. Inevitably, blood feuds would be decided, families restored, and peace treaties signed all before dinner time. With me at the helm, of course.

My first turn at the steering wheel of compromise came at a tender age and aboard a Rambo Bike.

Molded entirely out of black plastic and remiss of stickers that once identified it for outsiders to the Greer clan, the Rambo Bike was the transport of choice for Myan and me. Long days we would spend, pedaling to and from the cul-de-sac and barreling down the hills on Valley Tarn, gleefully oblivious of our willfully chosen near-death experiences aboard that last-legs three-wheeler.

One day, while in possession of the Rambo Bike, I decided to use Rambo's black box (ostensibly placed at the back of the bike for wartime "supplies") to facilitate what was to be the Cherokee County equivalent of Nobel-prize winning diplomacy.

Recently, while playing in the red clay lots that dotted my street, I had noticed that the red ants refused to associate with the black ants. Feeling that this separation could only have resulted from some fundamental misunderstanding of some unintended slight, I hatched a plan to integrate the clans: I would select a few dozen ants from each hill ("emissaries" I called them), and I would use the Rambo Bike to transport each group of emissaries to the warring colony.

So I set about my task, raiding ant hills, gathering "chosen" emissaries on sticks (I have since learned this was not a particularly scientific sampling of the ant populations, a fact that I should disclose before the committee), and then panicking and shaking said sticks over the Rambo Bike supply pouch.

With emissaries safely inside, I then pedaled to the neighboring hill, to repeat the process and exchange the ants.

After seeing each batch safely to its new abode, I pedaled home, immensely proud of my foreign affairs coup.

Only, like most forced integrations, my anthill ambassadorship didn't go very well.

While I wasn't present for the carnage, my mother rather bluntly informed me that what I had done hadn't facilitated friendships, but had likely resulted in the mass murder of my chosen ambassadors.

By all measurable accounts, my first foray into promoting insect brotherly love was a disaster. And I was distraught over what I had done.

I lost sleep over it then.

And I'm losing sleep over it now...

As an adult, I have been fortunate enough to travel to places where folks speak different languages, have different customs, different priorities, different faiths. And, as Clemens so astutely observed, travel has been "fatal to prejudice" (excepting, of course, that prejudice I've developed for my own kind who refuse to see that the world can and does "work" in other ways). Indeed, I've become increasingly sickened by those I deem to be purposefully and without remorse "vegetating in one little corner of the earth."

And this is why I know - despite my continuing grandiose dreams - that I could not and should not be a diplomat. Because I dislike and judge people, which undermines my ability to justly conduct myself. And I've seen firsthand the disaster I can wreak if given the power to facilitate forced communication...

No, friends, I am no diplomat. But I am an irascible writer. And in the land of my cognitive dreams, I can bring both sides to the table. I can make each understand the value of the other. Because, in my mind, I have the power to open yours...and the cowardly privilege of not having to live with the repercussions of that action.

“Stars and shadows ain't good to see by.” ― Mark Twain, The Adventures of Huckleberry Finn