Why is everybody always pickin' on me?

People are astonished when they find out I left the world of professional modeling and film acting behind voluntarily.

I suppose it's because we're brought up to see these jobs as glamorous. After all, it's what the beautiful people do. And it makes them rich.

To this I would reply "Yes, and yes. But does it make them happy?"

"I know I'd be happy if I had that kind of money, that spouse, that ass," is what I usually get in return.

But I'm telling you people, no you wouldn't. Because it's not what you see on red carpets and in the theatres.

And that, dear masses, is why I left.

I left because no amount of being on set with famous people (many of whom are vapid. Or shallow. Or batshit crazy. So, you know, they're people just like you and me), receiving that SAG paycheck, or boasting to my friends that they should TiVo X,Y,Z at such-and-such time because I was gonna be on it was enough to make me continue to endure the following:

2. Kiss-asses. You know the type. Cast or crew, doesn't matter. Those folks who are far more concerned with getting the card of the right person/people on set than they are about adequately doing their job. And woebetide you if you happen to be one of the people they think they need to impress. They'll follow you around. They'll "like" everything that you like. They'll make every attempt to be your best friend by the end of the day, all without recognizing that you're actually there because you have a job to do. And they're impeding it. (Talking to you there movie extra; you know who you are. The one who wants to chat me up and get my card when I'm trying to get the cameras rolling so we come in on time and on budget).

3. The time. Set time is slow time. It's arduous time. It's let's-do-it-again-for-the-15th-time-in-a-row time. It's "Okay, let's film that exact same scene again from another angle; We're gonna be late to lunch, Can I get grace?" time. It's touchups and bounceboards and soundchecks and roomtemps time. Some folks genuinely have fun with it. It exhausts me.

4. Inconsistency. When it comes to work, I thrive on having a plan. I guess that's why I am happiest when in the role of AD or Producer. But, as film is such a collaborative experience, I am constantly plagued by the lack of consistency. Even if your director is prepared and knows exactly what he/she wants (This seldom happens. For those directors who have come to set prepared, knowing what they want - I solute you. A million and two times.), the lead actor will be late, thus throwing off the whole schedule. Or props will be missing a towel, and therefore have to go to the store - and Walmart is 10 miles away. Hair will be out of bobbypins or camera will have forgotten to charge the batteries. Lighting will be short on...lights. Generally speaking, it's a rule of thumb that something, somewhere is going to go wrong. You just have to roll with the punches. I? Do not excel at rolling with the punches.

5. Body image issues. While this one applies to modeling directly, it also applies to a solid 75% of actresses with whom I've worked. The insecurities come out. The I-wish-I-were-this and if-only-I-were-that comes out. It's a very poisonous way of thinking. Very detrimental. Here I am, on modeling sets with some of the prettiest girls in Atlanta, and all we can talk about is what we have too much or not enough of. What we wish we had. And thinking that way is nothing short of mind pollution and soul poison. I had to get out.

6. Lack of control. A considerable while back, I opted to switch from in front of the camera stuff to behind the camera stuff - mostly to have more control. But no matter what position I held, control was eventually passed to the next person, who, for better or for worse, put their stamp on the project. Type A people (talking to you, Tyler Perry) have a very hard time with this. And I am, admittedly, a Type A. It's gonna kill me. Likely in my 40s. I've come to peace with it.

Some of you have gotten this far and done so fuming with offense. To those of you I say, "I'm ending this relationship," which I quickly follow with, "It's not you; it's me."

Even if you fit into one or more of the categories above, if you love what you're doin,' then by all means, keep doin' what you do.

What I'm trying to say here is that I didn't love it. I don't. Which is why I can walk away without looking back.

Ode to a Thesis

The immortal Oscar Wilde once said, "There are only two tragedies in life: one is not getting what one wants, and the other is getting it.”

For a long time now - about a year - I have wanted to complete my screenplay. Born from screening a late-night, can't sleep documentary that somehow burrowed itself into my cranial cavity and set up shop, this one really meant something to me. Unlike so many earth-shattering ideas that I leave by the wayside, this story had meaning. It needed to be written.

And it needed me to write it.

Not unlike its predecessor, which I finished the year before, this particular screenplay was inspired by true (or semi-true) events and people whose stores fascinate. For me, many of these stories have been lost to time, and, for some reason, I feel an inexplicable duty to bring these stories to light.

My professors call it a thesis.

So while more balanced people who are not presently living under the burden of magical thinking go out with friends or spend time with their families, I, with my self-imposed cognitive quest, bang away at the keyboard on this old-but-still-kickin' MacBook, churning out tales of people who actually went out and did things instead of just sitting around writing about them.

I sometimes feel this is my lot: to be the chronicler for people greater than myself. To ensure that their legacy, not mine, somehow stands the test of time while somewhere far-less-important, my bones turn to dust as bones are want to do.

It's not a wholly thankless job. Some writers who immortalize the epic works of others are remembered in their own right for style or grace or manner. Plato, for example, remains a household name, despite his literary efforts being largely a spirited retelling of the teachings of Socrates.

But I am no Plato.

And what I write? No treatise on Socrates.

And perhaps that's why I feel as I do presently.

For others, I am certain that penning the last line of what amounts to three years of your life and study, would elicit some sort of intense emotional or intellectual response. Some feeling of pride or relief or superiority or...something.

But I feel none of these things.

In truth, I feel nothing at all.

By definition, a thesis is a noun, specifically "A statement or theory that is put forward as a premise to be maintained or proved: 'can you support your thesis?'."

Can I support my thesis?

It's an interesting question.

I think so. I mean, I've spent more time over the past year with these characters than I have with my parents, my siblings, and my closest friends. Maybe combined.

And why shouldn't I? They were born of their mothers but their actions played out in my brains.

I decided what they wore.

I decided what they said.

I decided what they did.

I decided when they died.

And for a codependent creative like me, that kind of power is the ultimate dream gift.

Because there's not a day that goes by where someone doesn't say or do or die in a way that I wouldn't somehow modify.

And I think that this would make me happy.

Because this level of control doesn't deliver any surprises. And, as everyone hopefully knows, when the good things do come, they are so much sweeter if they arrive, not by force and in the way you meticulously pre-imagined, but rather by kismet-ic, chaotic circumstance in an unidentifiable package.

Maybe that's why the pride won't come today. Or the relief. Or the superiority.

Maybe that's why Hemingway put a bullet through his brain. Because, after all, “There is nothing to writing. All you do is sit down at a typewriter and bleed.”

It's easy to say I've been busy. Or tired. Or troubled.

It's easy to say a litany of things. All of them true.

But what it isn't easy to say...is that I have absolutely nothing to say. About anything. Maybe for the first time in my life.

In recent weeks I've dealt with my diagnosis. I've attempted to come to terms with my impending surgery. I've faced work headaches and personal woes. I've scouted countless houses for the upcoming move. I've made infrequent but definitive strides toward the completion of my thesis.

I've read stories that broke or touched my heart. I've even written some that, at least for the moment, piqued my interest.

In light of these developments, you'd think I'd be brimming with a cacophony of things to say.

Perhaps I've lost my words to the stress. Or to acknowledging just how terrible (or tedious) some people can be.

I cannot pinpoint the cause. And while that should sadden me, I haven't the words to articulate it.

I haven't any words at all.

Some call this writer's block.

I usually call it depression. Or stress. The two are pretty dependent on each other anyway.

But today I figured I'd muster the one iota of creativity I have to blatantly bogart someone else's intellectual property.

Today, I will instead introduce you to a new term I have concocted:

Named for the Disney character that I do not own/cannot claim rights to/will steal regardless, my term refers to those times in life where you are so low - so physically and psychologically drained that leaving the bed for the bathroom seems like an excruciating effort - that you simply cannot say something nice.

And, as we all know, if you can't bring yourself to say something nice, you're better off saying nothing at all. 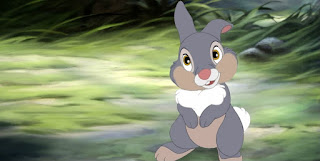