I thought no one understood me, and then I read this. And I cried. In the hallway. At school. http://hyperboleandahalf.blogspot.com/2011/10/adventures-in-depression.html
at October 31, 2011 1 comment: 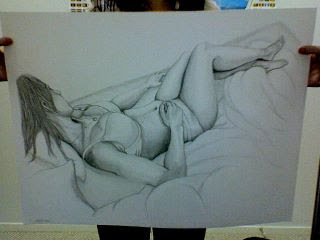 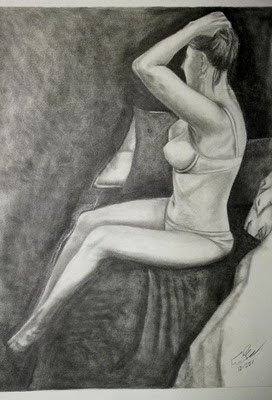 Me.
As seen and drawn by the lovely and talented Alexandra Miller (top) and Evin Fowler (bottom).
at October 25, 2011 No comments:

List of people I have been told I resemble in the past week:

Add to that the past few years:

*Jennifer Anniston
*Amanda Bynes (a stranger actually wanted my autograph because he thought I was her.)
*Carrie Fisher
*Sarah Michelle Gellar
*Jennifer Love Hewitt
*Some German actress whose name I can't remember

And what do all these ladies (and solitary gentleman) have in common? Not a thing, so far as I can see. Except...Could it be? LIL' OL' ME!

Huh. Guess beauty is in the eye of the Borgnine.

You know that guy who said "God sends you trials to test you and make you stronger"?
Yeah.
Fuck that guy.

But does he have a point? Are trials truly sent by some sadistic deity with a penchant for people's pain, or are they merely the inevitable consequences of your own piss-poor choices?

Consider:
Was it Allah that made me punch a police officer who I had somehow mistaken for a killer clown on the lam, thus landing me in jail where I met Rico the Colombian-drug-lord-turned-imam who opened my eyes to the wonders of Islam? I mean, I found religion. I found peace. Hell, I now work for UNICEF...So was it God who lead me to the homicidal Bozo hallucination? Or was it the 10 mg of heroin I shot up in the bathroom of The Masquerade just prior...?

My money would be on the China White, but then again, the Lord does work in mysterious ways...

As I spent my morning contemplating these questions instead of doing something of import--like pilates--I began to realize (right now, as a matter of fact) the futility of the above questions. Not that they aren't worth contemplating, but that mankind has mulled over them for centuries and no conclusions can be reached, save this: such debates question the existence and role of God in our lives. I mistrust anyone who claims to have answers on this point. And you should too. I mean, I personally do not know what is more off-putting--their claims to divine knowledge or their spray tans and perfect teeth... Anyway, as the answers cannot be known, these questions are futile.

Which, it turns out, is actually alright by me...because these questions are not really the ones I want to ask. After hours of sleeplessness and what has now become a rambling blog, I have finally honed in on the quandry that has set up shop in my brain and is spreading like a disease directed by Steven Soderbergh.

What it really comes down to, my friends, is this:

Is this all my fault?

With earthquakes, the world literally breaks apart at the fault line. Is it the same in life?

Am I the reason things just aren't lining up?

And what do I do if the answer turns out to be even scarier than a killer clown on the lam?
at October 17, 2011 No comments:

Look Ma! I DO inspire people!

An ode to me from the dear Tom Gillespie:

To write a bitch a sonnet 'pon this hour
and pique her mind with cogent thoughts indeed;
this task hath made my countenance quite dour
while alcohol has rob'd my wit its speed.
Gamely press I on past darken'd midnight.
... My face in Facebook profile starkly limn'd
by CRT in ghastly greenish-white.
My drink now done; my artful longing dim'd.
And yet the bitch her sonnet will require;
her plaintive suitors for her notice vie.
They shall not soon succumb to sleep's desire
unless Erato deigns their thoughts should fly
with inspiration to reveal the words
that best prevail to melt the bitch's heart.
And after Rhyme and Meter's laws secured,
Select and copy, paste, and post thine art.
Poetic bitches sleep, and know no fret,
their literary expectations met.
at October 13, 2011 No comments:

Stand back, please. This may get messy, and, given my penchant for clumsiness, there is a high likelihood that if you don't maintain a safe distance of at least three feet, I may well land on YOU instead of this trusty sword.

You don't want that, Kaishaku.

And I don't want this.


In mere minutes I perform my literary Hari Kari--writing a recommendation for a fellow playwright who has been nominated in my stead for a prize I coveted. You see, I was the original nominee for the award...Yes, me. But like so many things shadenfreude, the Fates stamped a big ol' red, inky "DENIED" on that dream. Turns out the competition does not accept graduate students. Yep. I guess I'm just too damned educated to succeed.

Thing is, this other guy--the one I'm writing for--he's good. I like his stuff. And I know I can write the kind of recommendation that will make him a front-runner for the prize.

The irony is agony--a blade in my belly: my own penned words scream from their pages, falling on the deaf ears of an anti-graduate student panel, but my endorsement-- spawned from the same mental source and presented in the same word-processing software, will speak loudly and in favor of another.

This disemboweling thing? It hurts.

To whom it may concern:

Damned clowns. I NEED A GENERATOR!

In a recent man-on-the-street poll, it was determined that eight out of eight harried and frail filmmakers scheduled to shoot this weekend awoke from night terrors screaming the words, "Fuck! I need a generator!" at 3 a.m.

That said, my shoot is this weekend, and I couldn't be more terrified. Unless, of course, there were needles, balloons and clowns involved. Did I ever tell you about the day a clown came to JollyLand and 'wowed the crowd' of children by impaling a yellow balloon with a giant silver needle? Yeah... Chris R***e thought it was the best thing ever. But then again, Chris R***e liked to open the stall door on little children as they used the bathroom, so I don't count him as much of an authority...

Flash forward: 3 a.m. tonight, Erin sits bolt upright in her bed, clutching her satin sheets, and screams: "Fuck! Need a generator! And who let Chris R***e and that goddamned clown on set!"

Turns out mainlining french vanilla with 2% while multi-tasking/juggling Reservoir Dogs and film production is NOT an effective way to induce a peaceful slumber. So tired at this point that the moniker "Kirk Baltz" has somehow reached a heretofore unrecognized level of hilarity.
at October 02, 2011 No comments: